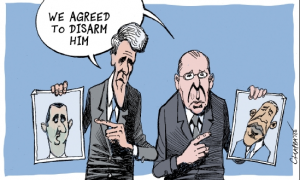 determine the existence of any threat to the peace, breach of the peace, or act of aggression and shall make recommendations, or decide what measures shall be taken in accordance with Articles 41 and 42, to maintain or restore international peace and security.

In the matter of Syria, the Security Council has recognized[v] that there is a threat posed by Syria to international peace and security. The Security Council has acted in accordance with its article 39 powers, it has “called”[vi] for the implementation of Kofi Annan’s[vii] peace plan, it has called for an immediate cease fire,[viii] and has implemented, albeit briefly, a observer mission,[ix] all to no avail.

The Security Council under the Charters article 41 and 42 powers has many more options available to them. They have taken none they are authorized to take. Why? Russia and China… While it is nothing new for a permanent member to veto a resolution in support of its own domestic political mandate or to protect an ally, in face of the exceptional loss of life and suffering, it is rare for a State to brazen as to invoke its veto power in face of such international pressure. So why are China and Russia doing this? In short to protect the existing Syria government (which is allied with Russia) and to seemingly prevent the formulation of positive international custom recognizing international action to remove an oppressive regime (China). So to put it colloquially, people are dying to protect Russia’s ally in the region and to protect China’s regime…

The fact is that the Security Council is broke, and has been broke since its inception, and as a result international law is in peril. The crisis in Syria is just another proof of the shortcomings of the Security Council and there is no hope on the horizon of any improvement. It would take a whole new Charter system to fix this problem that is the Security Council. While many States would welcome a new international system, there is no way one could be conceivably be created. The international wherewithal and impetus that existed post-world war II that led to the creation of the U.N system no longer exists, there are no colonial powers who may impose their will on the world, for better or worse, to create a system. 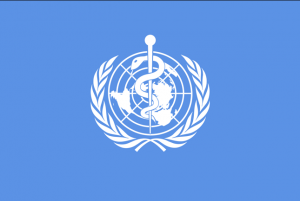 So what is the international community to do? I would posit that collective states acting in concert are the solution to the inability of the Security Council to act. While many would posit that NATO’s actions in Kosovo were illegal, they, that is NATO’s, action were the only way the mission would have ever been accomplished and the lives of countless saved. States must take it upon themselves to protect those who cannot protect themselves from tyrants and dictators who put their own political lives ahead of those they are supposed to be protecting. Groups such as NATO must step up and fill the role that is being unfulfilled by the Security Council until such time the Council begins to fulfill its mandate. It is recognized that this is not an ideal solution but neither is it ideal to standby and watch 30,000 people lose their lives  or terrorists can access to WMD’s because of political machinations at the UN. Action must be taken and if the Security Council cannot do so then States and international groups must do so.